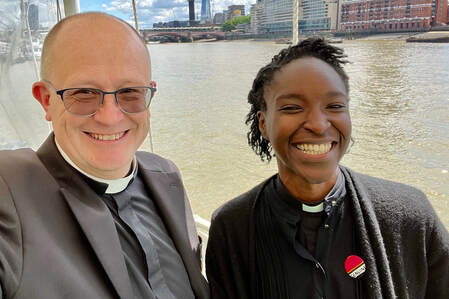 
The Revd John Pearson-Hicks was licensed as Priest in Charge on 28th  October 2015, having previously been commissioned by the Bishop of London on St Barnabas Day 2015 as Chaplain.  He became our stipendiary priest on 1st September 2017.

Fr John was ordained deacon in 2005 and priest in 2006.  He served his curacy at The Grosvenor Chapel in Mayfair as a non-stipendiary minister under Fr Simon Hobbs and then Fr Mark Oakley.  From there he moved to St Stephen with St John, Westminster where he served from 2009-2015 under the Revd Philip Welsh and then the Revd Graham Buckle.

Prior to becoming a stipendiary (paid) minister Fr John was a primary school teacher.  He started his teaching career at St Matthew's CE Primary School, Old Pye Street.  He then spent some time in Hackney as a Deputy Headteacher and then in 1999 became the Headteacher of St Barnabas CE Primary School (next door to church!). From here he went on to spend ten years as the Headteacher of Burdett-Coutts and Townshend Foundation CE Primary School (behind St Stephen's Rochester Row).  In 2013 John spent a term and half covering St Stephen's and took on an interim headship in Islington until he became stipendiary (80% of the week) at St Barnabas.  Fr John spends the other part of his working week as a School Data Protection Officer for Grow Education Ltd, the trading arm of the London Diocesan Board for Schools which John has spent over 30 years working in.

John grew up in Cornwall (St Ives), attended Truro School (a Methodist Boarding School) and then went to college at Crewe and Alsager to study art.  From here he completed his PGCE at King Alfred's, Winchester.  Along the way he has also picked up a Diploma in Maths Education, a Masters degree in Theology and Education from Kings College London and a Diploma in Theology prior to ordination (NTMTC).

The Revd Theodora Jejey was ordained deacon on July 2nd, 2022 by the Bishop of London.  Reverend Theodora serves as an assistant curate. This is her first post following three years of studying theology at Ridley Hall, Cambridge.

Reverend Theodora writes:
I was born in Brazzaville, Congo, and I am of Ghanaian/Ivorian and Nigerian heritage. Thanks to my father's work in the U.N., I have lived in six different countries in the U.K. for twenty-four years, 16 of those have been in London. London is the place I call home.

My story, including my faith journey, is a very long and complex one – one I am looking forward to sharing with you all. I grew up with Catholic parents but was baptized and confirmed in the Church of England at 14, while I was at an all-girls C of E school in Buckinghamshire. I drifted away from my Christian faith for all my teenage years.

Aged 21, I returned to faith in a Pentecostal church, where I remained for seven years. After this time, I re-discovered Anglicanism in an open evangelical context in 2010. Since then, my faith journey has been quite an adventure. I have discovered and experienced the Lord's goodness, mercy and grace in all kinds of exciting things, including New Monasticism and Celtic Christianity, Quakerism, and Black Theology, to name a few. I found my vocation as an artist while working as an actor, performance artist and theatre-maker. I served in an urban mission context as a youth and community worker. I've also had the privilege of being part of a quasi-religious community called the Community of St. Anselm.

I am an introvert who loves indoor plants. I love going on long walks, analogue photography, dancing, writing letters, weaving with willow, and going to the cinema (Marvel and Star Wars are firm favourites). Most of all, I love stories. I have no objection to being Dora the Explorer (what's not to love?) … And Jesus is my favourite guy.

I am excited to see what marvellous adventures and stories will unfold as I serve with you all at St Barnabas. I am very much looking forward to meeting you all.